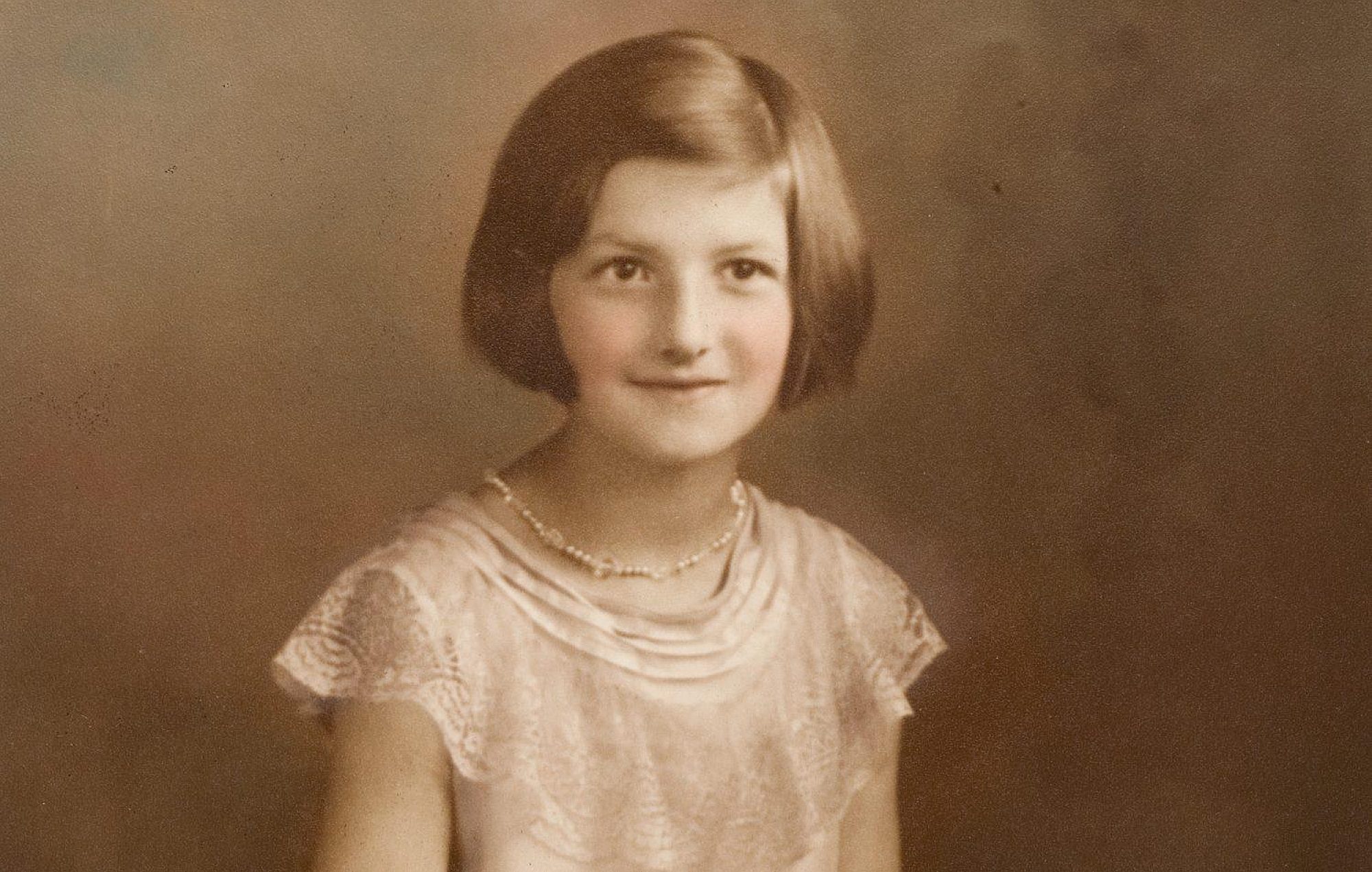 Helen as a grade school student. She began playing the piano at age 4, long before her feet could reach the pedals.

Born Helen June Van Wesep on February 24, 1927 on Alexander Street SE in Grand Rapids, Michigan, she was the daughter of George and Wilma Burggraaff Van Wesep.

While enduring the Great Depression as a toddler, Helen’s schoolteacher parents survived on as little as $800 a year.

As a child, Helen betrayed her otherwise quiet nature on more than one occasion. At 5 or 6, she disobeyed her mother’s admonition to be home on time, and found herself locked out of the house.

Years later, she was minding the passing minutes on one of her own children, Doug, who burst across the DeVos family threshold late and exclaimed, “I’m wrong and I’m sorry!” That apology went on to serve Helen’s husband, Rich, as a touchstone in a book he authored, entitled “Ten Powerful Phrases for Positive People.”

As a young teen, Helen and her parents moved northwest to Benzie County, where Helen was swept away by both the grandeur of Lake Michigan and the comforts of a small town measuring fewer than two square miles, and whose population numbered fewer than 1,700 at the time.

It was an idyllic place to grow up, and the Van Wesep family lived within walking distance of all the town had to offer. Back then, in the early- to mid-1940s, there were two draws on Main Street — Minda’s ice cream parlour, and just two doors to the east, the still-standing Garden Theater, which during that era was showing movies such as “Casablanca” and “Bambi.” 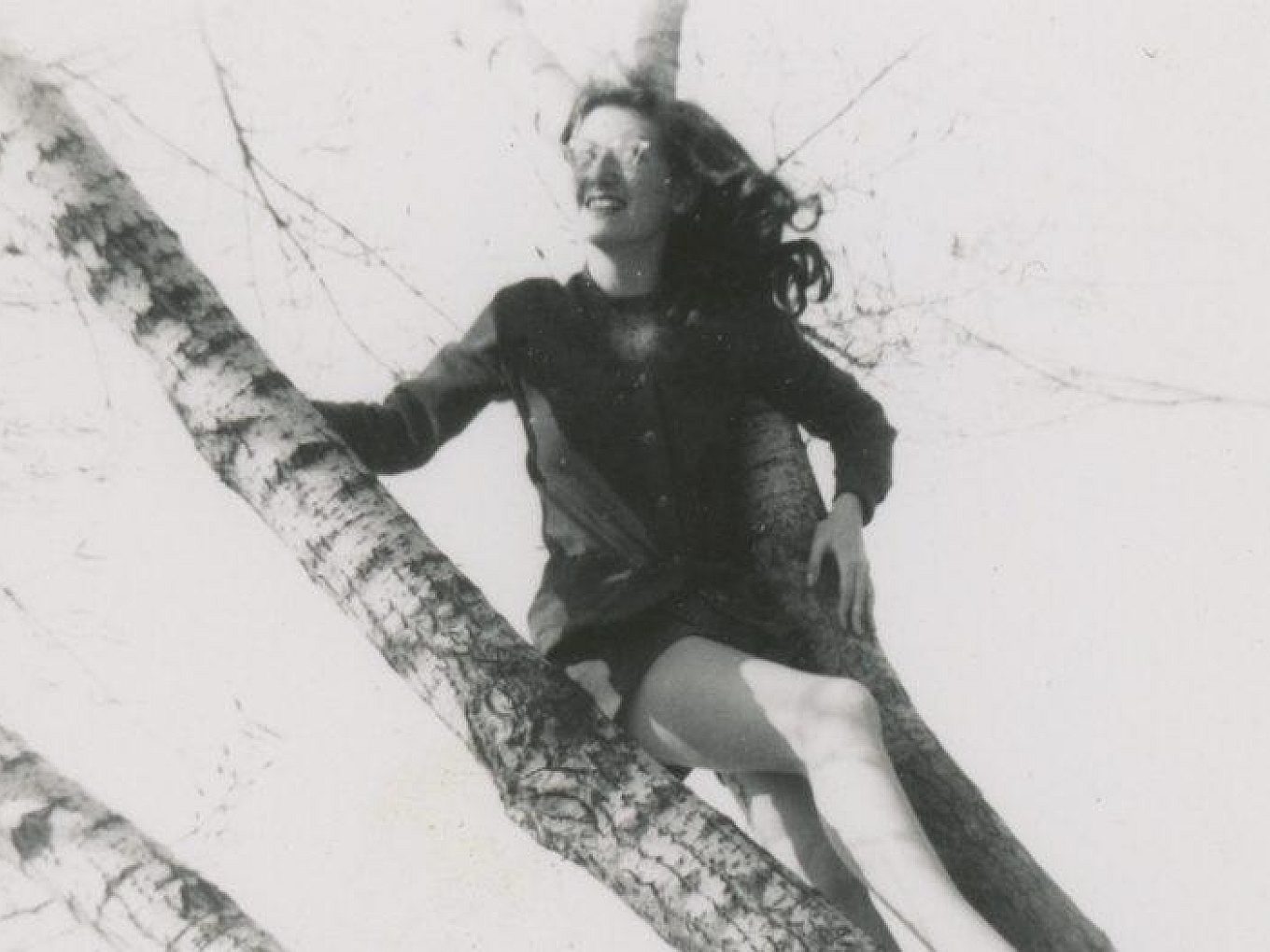 1/4
Helen grew up near the shores of Lake Michigan and summered near the Atlantic Ocean with her parents, later exploring the world by land, sea and air with her husband, Rich.

2/4
Helen with her parents, George and Wilma Burggraaff Van Wesep. 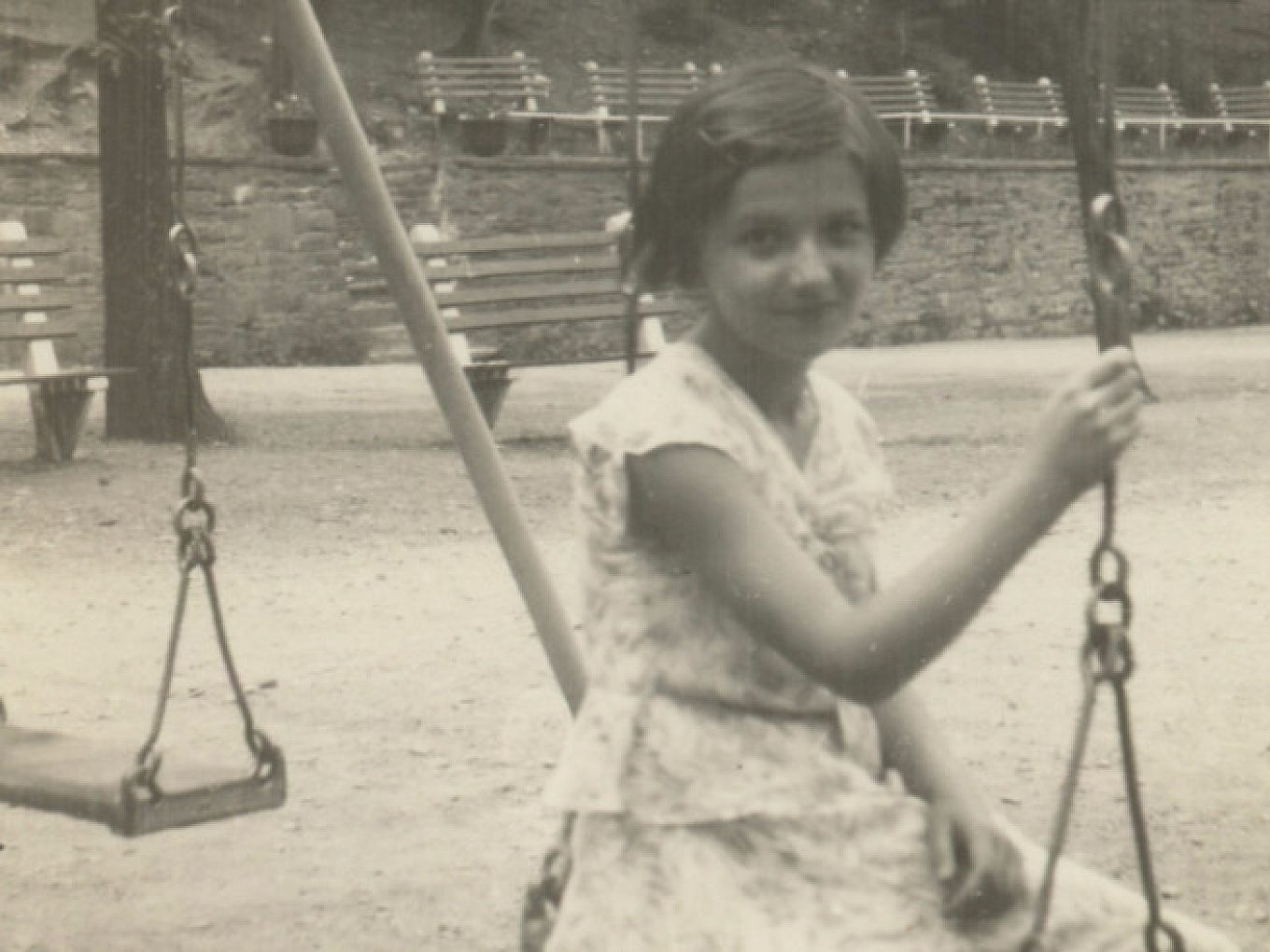 3/4
A young Helen DeVos sits on a swing outside. 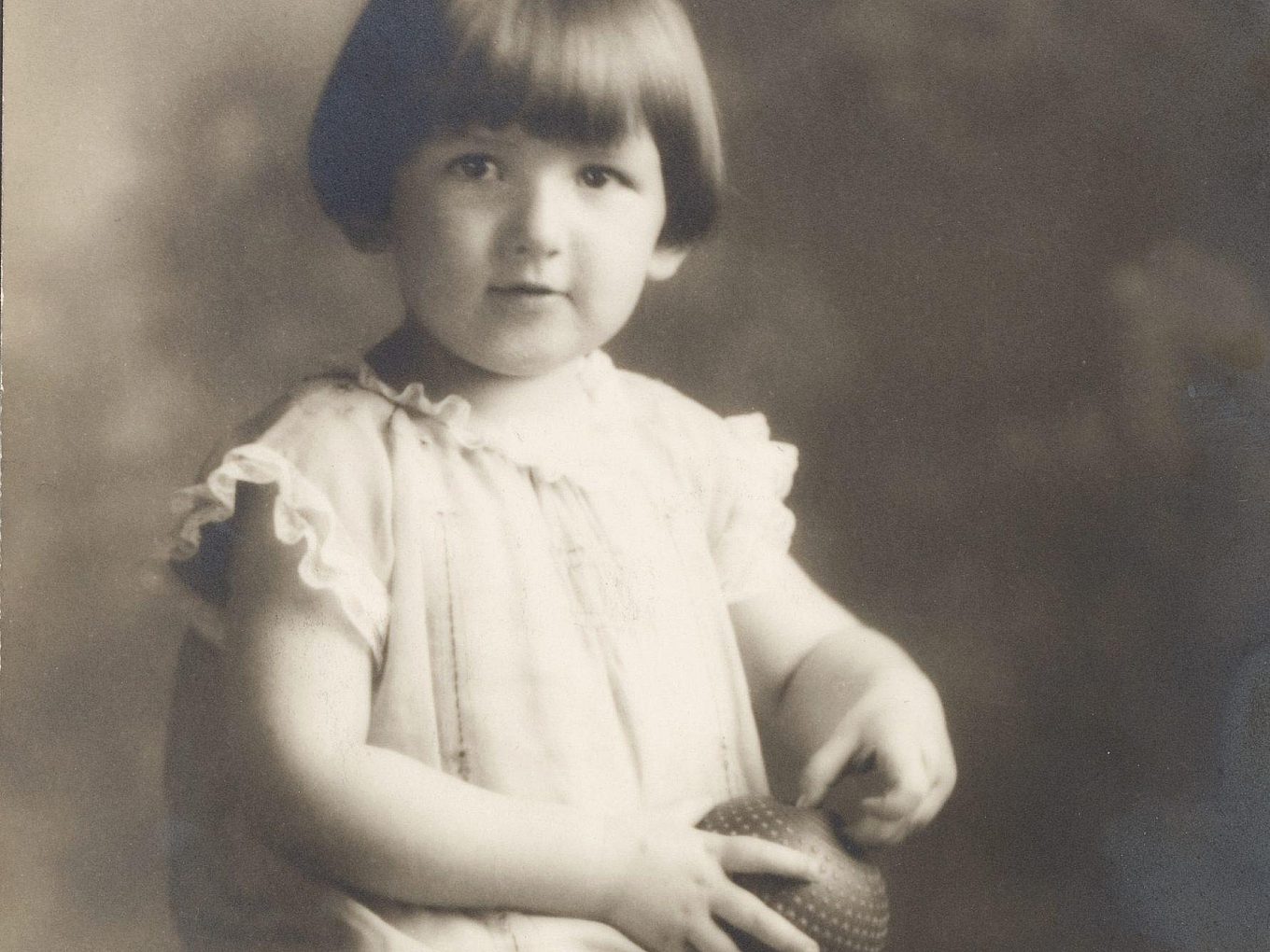 4/4
Helen as a toddler poses for a professional portrait.

In summer, students poured out of the big wooden school building topped by a bell tower that served kindergarten through 12th grade to pursue seasonal jobs at filling stations, restaurants, three summer resort hotels, and a ferry that ran between nearby Elberta and ports in Wisconsin and the Upper Peninsula.

At 16, Helen’s life was interrupted by a burst appendix, after which she nearly succumbed to an infection that required her to spend three weeks hospitalized in Traverse City while the open wound healed.

In 1943, she graduated from Frankfort High and began attending Calvin College. It was a remarkable time for Helen, as this only child began to forge friendships that would last throughout her lifetime. These college girlfriends later formed her potluck group and kept their relationships strong over time. 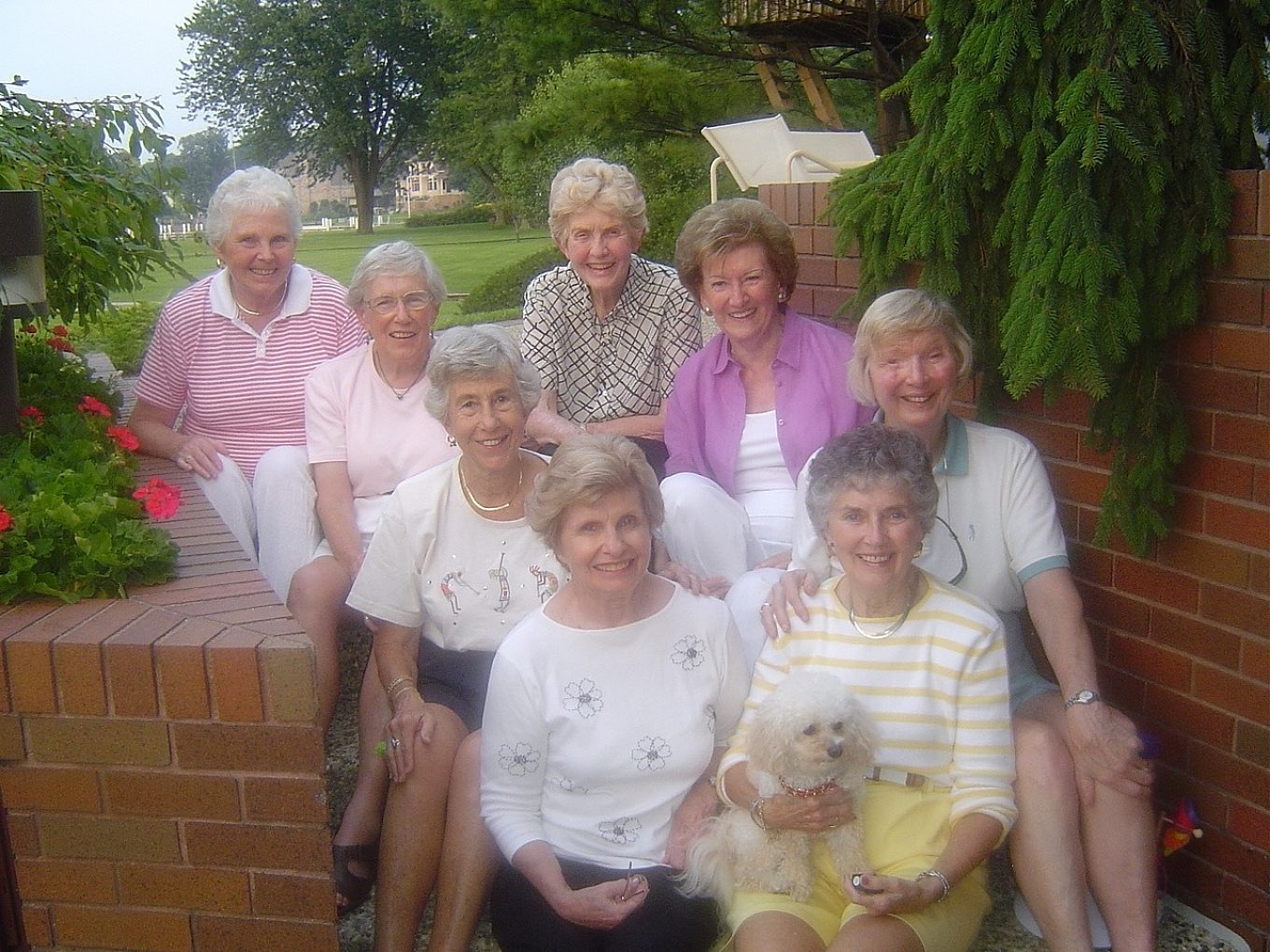 Helen sits on stairs outside with seven women, all members of her potluck group.

In 1947 Helen earned an early education degree from Calvin College and began teaching 2nd grade at Madison School in Grand Rapids, a profession she would enjoy for nearly six years.

Her parents were still making their home in Frankfort, and once, while deliberating how to visit them, Helen decided to fly from Grand Rapids to Traverse City.

“I decided to treat myself to a plane ride,” she told her family at a get-together years later. “I wasn’t in any particular hurry to get to Frankfort that I remember; I just thought it would be a fun adventure to be able to fly. It was kind of an unusual thing for me to do on my own. I guess I sort of surprised myself.”

It was the first of many adventures Helen would take later as she began her life with Rich DeVos.