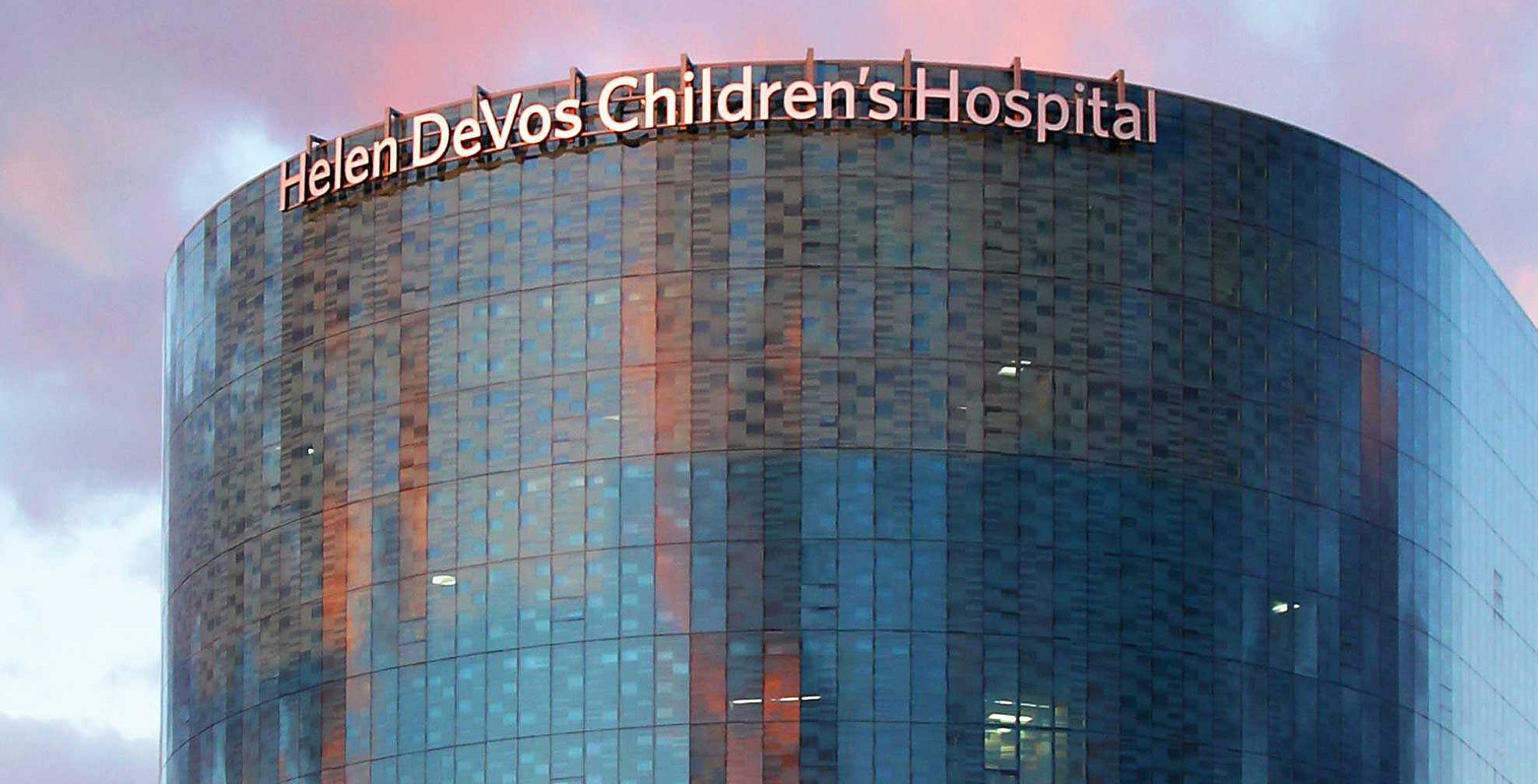 The DeVos children surprised Helen with major gifts to the hospital in her honor.

Helen DeVos did not live to see the 10-year celebration of the children’s hospital building that bears her name, a big, blue state-of-the-art facility dedicated to the health and well-being of babies, children and teens.

But her presence, and that of her husband, Rich, was felt in January 2021 as officials reflected on the hospital’s accomplishments over a decade in that building and nearly 30 years as part of Spectrum Health Butterworth’s campus.

Dr. James Fahner, division chief of pediatric oncology at the hospital, said the couple was undoubtedly looking down with pride over the hospital’s success.

“I know of all of their many gifts in this community, this one was very, very dear and special to Helen’s heart,” he said. “They just kind of set this wonderful bar for the rest of the community, who really stepped up in that initial campaign and came together and made it possible.”

A place ‘for people to do great things’

Helen DeVos Children’s Hospital opened in 1993 with leading financial support from the DeVos family and several other area philanthropists. It moved into the current 14-story, $286 million building on Jan. 11, 2011, to offer expanded specialized care for babies, children and teens.

But its roots date back to the 1970s and 1980s when a number of pediatric specialists joined Spectrum Health Butterworth Hospital with the goal of building expertise in children’s specialties such as neonatal, cancer and intensive care.

Now, the hospital treats more than 9,000 children, handles 56,000 emergency department visits, performs 8,700 surgeries each year while caring for more than 1,400 newborns annually in the Neonatal ICU.

“Mom and Dad always believed that buildings were merely platforms for people to do great things,” the couple’s youngest son Doug DeVos said on the occasion of the milestone. Doug is also a Spectrum Health Board member.

“We are grateful to all the skilled professionals who make miracles happen every day inside the Helen DeVos Children’s Hospital and are cheering on each child – along with their families – as they receive care there,” he said. 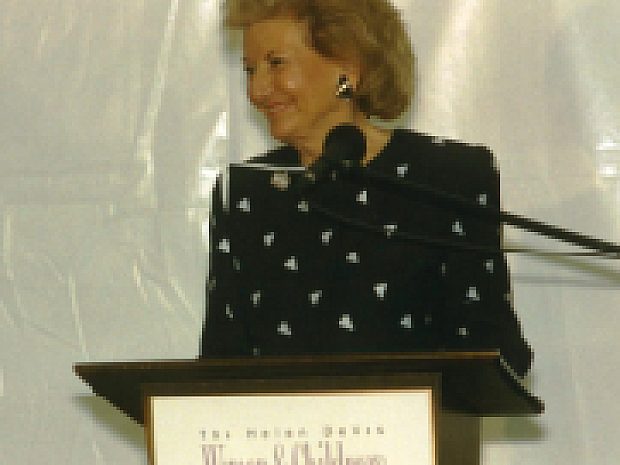 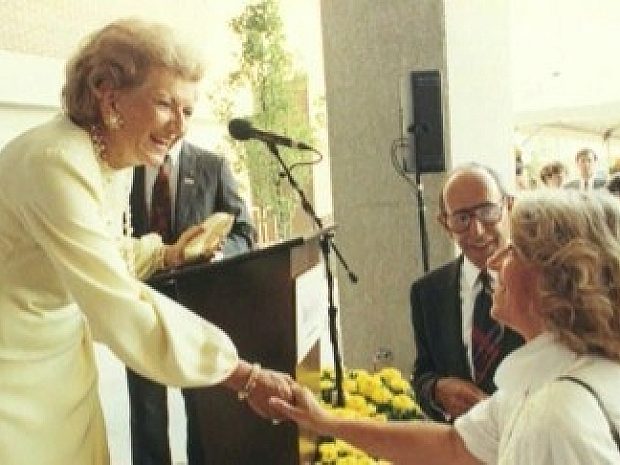 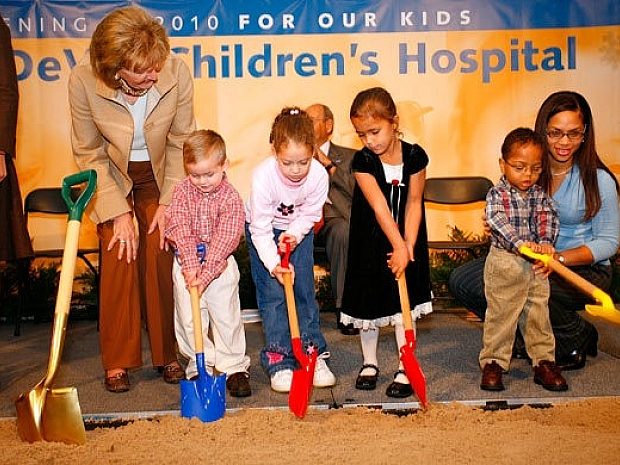 Helen at the groundbreaking for the Helen DeVos Children’s Hospital, named in recognition of her lifelong advocacy for the health and wellness of children. The hospital offers state-of-the-art care for children and teens. 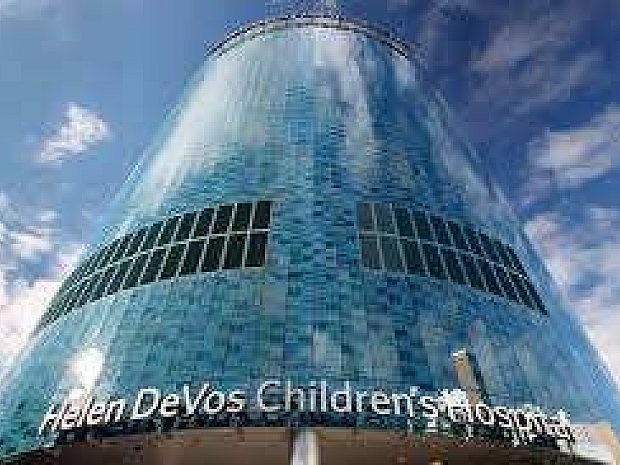 The Helen DeVos Children’s Hospital, a landmark in Grand Rapids, marked its 10th year in the iconic big blue building in 2021.

Over the years, the glittery blue tower on Grand Rapids’ Medical Mile has become a symbol of hope and healing, drawing families from across Michigan and beyond. The 234-bed national referral center and teaching hospital offers advanced pediatric specialty care with more than 300 pediatric physicians who practice in 70 pediatric specialties and programs.

The hospital also provides care close to home in over 50 regional clinics and shares its expertise through Partners in Children’s Health, a collaboration with more than 30 hospitals throughout Michigan. Helen DeVos Children’s Hospital has been recognized as one of the nation’s best children’s hospitals, ranking as a top 50 hospital in eight clinical categories by US News and World Report.

“Those who saw the need years ago for specialized care for our youngest patients were true visionaries,” said Tina Freese Decker, Spectrum’s president and CEO. “Without them, Helen DeVos Children’s Hospital would not be the vital community resource it is today.”

More than 30 years ago, children from this area had to travel outside Grand Rapids for much of their care, said Children’s Hospital President Dr. Hossain Marandi. Now, he says, almost 99% of any type of care a child needs will happen locally in the heart of the community.

“We want the quality and the outcomes of the care to be so good that anybody that has a child that feels like they need to get care would feel comfortable bringing them here,” Dr. Marandi said.

Moving into the big blue building gave Spectrum the ability to expand its pediatric services and ensure that related specialties were clustered in one area. Pediatric cardiovascular and open-heart surgery programs as well as a cardiovascular intensive care unit were added.

“To have the ability to deliver a whole comprehensive team of services that before was kind of scattered across various locations in the medical center and even off-site — to bring that expertise and centralize it in one location just really added so much to the safety and efficiency of care,” Dr. Fahner said.

The dedicated children’s hospital building also helps with the recruitment of pediatric physicians and specialists, he said. It sparks collaborations with other institutions along the Medical Mile such as the Van Andel Institute and Michigan State University’s College of Human Medicine.

The anchor of her family

Helen’s greatest legacy was the family she created with her husband, Rich. She was truly the anchor of her family — although she never would have said so herself.Family Memories

Providing that high caliber of care at the local level was a key factor behind the DeVos family’s support for local health care institutions over the years. They didn’t want people to have to leave home to get the care they needed.

And while their leadership and fundraising are notable, Dr. Fahner said their support went far beyond contributions and public appearances. He remembers the times when the cameras weren’t around.

Helen was personally involved in the hospital’s Child Life Program and took her grandchildren on regular visits to the young patients each holiday season. Dr. Fahner said they also often had lunch with some of the medical staff to get an update on hospital happenings.

“Rich of course would always have some wonderful words of encouragement and inspiration like only Rich DeVos can,” Fahner recalled. “Helen would typically have in her purse one or two of the many, many letters that she would’ve received in the weeks or months prior to our luncheon.

“Helen herself would read a letter and it would always be from a parent or a grandparent of a child that was cared for at Helen DeVos Children’s Hospital and there would not be a dry eye in the room among any of us,” he said.

“It was always a very emotional moment, but it really underscored the genuine compassion, the really authentic connection they felt to this children’s hospital.”